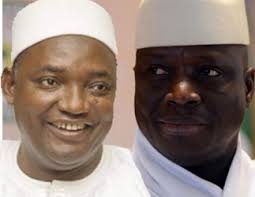 President Adama Barrow has said he will favour the extradition of Yahya Jammeh, if a Commission of Inquiry into human rights abuses recommends that he stands trial.

In an exclusive interview with Journalist Sanna Camara, Gambian President said Jammeh “will face the full force of the law” if the recommendations of the Truth, Reconciliation and Reparations Commission say so.

“I stand for justice for all crimes committed against the population. No one is above the law,” Barrow said.

Jammeh’s two-decade rule of the tiny West African nation came to an end in January last year after Senegalese troops and Nigerian fighter jets were sent into the capital, Banjul, to enforce the outcome of Barrow’s election victory the month before.

The National Assembly in December passed a “State of Emergency” law to extend Jammeh’s stay in power as the dictator made frantic efforts to challenge the results of the elections. Unfortunately, the Supreme Court was not even constituted to be able to hear the APRC’s election petition that Jammeh filed at the time.

President Adama Barrow said he personally believes in principles of rule of law and human rights. That is why the government is setting up an inquiry to establish truth and facts.

In July, Barrow initiated a separate commission of inquiry to identify Jammeh’s assets and probe whether they were legally acquired. In December, the National Assembly also enacted the Truth and Reconciliation law.

“As a matter of principle, I stand for justice for all crimes committed against the population. If the inquiry recommends a trial…. and you are found guilty, you will face full force of the law,” he said in response to question on whether he favours extradition and trial of Jammeh.

Jammeh, 52, who’s now in Equatorial Guinea, was sanctioned last month by the U.S. for alleged human-rights abuses and corruption during his rule.

His two-decade rule was characterised by a violent clampdown on dissents and opposition parties and pledges to kill homosexuals.

The country’s parliament passed a law in December to establish a Truth, Reconciliation and Reparations Commission to probe state crimes committed during Jammeh’s reign and criteria for selection of its 11-member commission have already been published y the Ministry of Justice.

Culled from The Point Newspaper