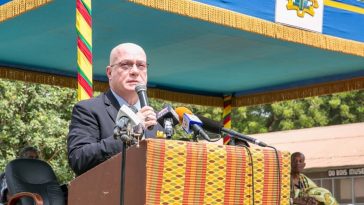 In the wake of the disputable military agreement amongst Ghana and the United States on defense collaboration, the US Ambassador to Ghana Robert Jackson has expressed that the arrangement isn’t in any capacity an attack of the nation and the one year $20 million interest in the Ghanaian military will yield a huge return.

Speaking to local news platform Joy News, the US Ambassador stated, “I think 20 million dollars being invested in the Ghanaian Armed Forces in one year is a pretty significant return.” In response to the United States having unrestricted access to the country as part of the deal, he said: “It’s not unrestricted access, it’s only access to the bases that Ghana makes available to the United States for the exercises.” He further on clarified that the United States does not get to choose the bases for the exercise but the Ghana government.

This “military agreement” was not received well by the Ghanaian public especially after years of denial by both Ghana and the U.S. government that there were no plans to set up a base in the country.

Watch the interview and share with us your thoughts.

Kim Jong-un was in Beijing, China and NK confirm