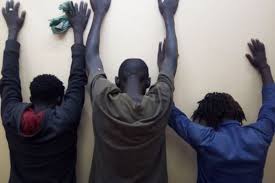 More than 20 suspected armed robbers have been arrested in different locations within the North Bank Region (NBR) following a recent raid conducted by security personnel in the region, The Point has been informed.

The suspected robbers are currently detained at Farafenni Police Station as investigation into the matters deepens. Security in the region, our source in NBR added, are currently screening the suspects with a view to find out whether they were part of the recent robbery cases at The Gambia National Petroleum Company (GNPC) and that of The Gambia Teachers’ Union (GTU), Farafenni branch and EcoBank.

Our source further added that on the GNPC attack, the robbers looted more than D118, 000. It was also reported that the recent attack that occurred at the GTU Farafenni branch, the armed robbers went away with lot of cash too.