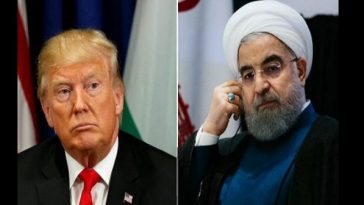 President Donald Trump yesterday announced the withdrawal of the United States from the Iran nuclear deal, calling it “disastrous”.

This decision to get out of the emblematic agreement signed in 2015 by Barack Obama was one of the promises made to the Americans during his presidential campaign. And fifteen months after his inauguration, he ratified his promise.

“I am announcing today that the United States will withdraw from the Iranian nuclear deal,” Donald Trump said in a televised speech from the White House. He also announced the reinstatement of sanctions against the Islamic Republic that had been lifted in return for Iran’s commitment not to acquire nuclear weapons.

Shortly after the announcement of the US president, his Iranian counterpart Hassan Rohani counter-attacked. He said he would enter into talks with Europeans, Chinese and Russians to see if they can guarantee Iran’s interests.

“We have to wait to see what the big five countries are going to do. I have ordered the Foreign Minister to conduct negotiations with the Europeans and the other two major countries, China and Russia, over the next few weeks. If these allow the interests of the Iranian people to be secured, the nuclear deal will remain and we can act for the sake of peace and security in the region and the world, “he said.

He also accused Donald Trump of practicing “a psychological war and promised that Tehran could start enriching uranium even further.

“The United States has always shown that it never honors its commitments. I ordered the Iranian Atomic Energy Organization to take the necessary measures … so that, if necessary, we resume the unlimited industrial enrichment. We will wait a few weeks before applying this decision. ”

Former US Secretary of State John Kerry, who had been involved in negotiating the deal, said in a tweet that Trump’s decision could once again plunge the world to the brink of collapse.

France, the United Kingdom and Germany also regretted the US decision. “We will work collectively on a broader framework, covering nuclear activity, the post-2025 period, ballistic missiles and stability in the Middle East, particularly in Syria, Yemen and Iraq,” the French president said. Emmanuel Macron.

“The international regime against nuclear proliferation is at stake,” he added.