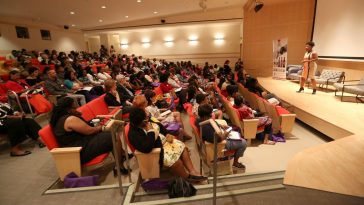 It can be hard to attend a majority-white middle school as an African-American girl.

She’s frequently in the minority in her classes, which is why she was so excited to attend her first Black Women’s Leadership Conference on Thursday.

That’s exactly what the third annual Black Women’s Leadership Conference event was designed to do: create a space for local African-American woman and girls, and inspire them to greater heights. The event runs Thursday and Friday at the Madison Museum of Contemporary Art, 227 State St.

This year’s theme was “Leveraging our Collective Power.” To Sabrina “Heymiss Progress” Madison, creator of the event and founder of the Progress Center for Black Women, it’s about fostering the collaborative spirit and community love she knew growing up in Milwaukee.

“You had your neighbors that would feed you, clothe you, help put your curtains up, and house you when you needed it. You had people you could turn to when you needed sugar or a couple dollars for a light bill,” Madison said.

But she didn’t find that when she moved to Madison. When she first arrived, African-American women repeatedly told her they didn’t feel connected or supported in the community. Madison wants to change that.

Madison’s mandate to support each other up appeared everywhere from the name of the awards, Collaborators of the Year, (“We don’t have to compete against each other if we’re competing for the same thing,” Madison said) to her insistence on networking between sessions (“Sit on State Street and like, really disrupt the white space down here.”)

“Look around this room, this community of folks who are here right now. Because you are not abandoned or forgotten about,” said Gail Ford, pre-college assistant director for UW’s PEOPLE program and a speaker at the event.

Attendees were feeling the love.

“One of the reasons that I did not want to move here was because Madison is known for its prejudice and its racial issues,” said Dana Dudley, an attendee who was born and raised in California. “To come here and see such strong black people, working together and thriving and empowering each other … It’s lovely. It’s life.”

The conference was also a chance for teens to witness models of African-American success.

That’s why Madison chose Chrishon Lampley, founder of Love Cork Screw, a wine and lifestyle brand, and Morgan Debaun, founder of the tech company Blavity, as the keynote speakers; they serve as examples of excellence.

Yolanda Tolson-Eveans was honored as a 2018 Collaborator of the Year, but she was more excited that her daughter — who didn’t have an African-American teacher until 11th grade — could come.  She said it makes her emotional to think about it.

“All of the messages we get are about not measuring up, and not being good enough, and not achieving,” she said. “Our children need to be able to see to believe.”

Tiana Wilhelmi is a 14-year-old student at Madison West High School, where she often sticks out as one of the only African-Americans in class. It’s much more comfortable, she said, to “see my skin all over the place instead of being the minority,” she said.

The conference offered a safe space for attendees to be themselves, but Madison encouraged the women to showcase their full personalities everywhere they go. She personally wears her tennis shoes and jeans no matter the occasion, she said, and she’s not here to “play games.”

“I don’t feel like I need to go and change myself to fit into the environment,” she said, telling attendees not to apologize for being in all-white spaces around the city.

But Madison acknowledged that authenticity as a person of color can be exhausting.

“Get the hell out of Wisconsin as often as you can,” she said. “(It will) show you how to better change this place.”

Lampley, the conference’s Thursday keynote speaker, was also upfront about challenges, telling the audience that as black women, they will have to work 10 times harder to achieve the same level of success as their white peers.

She’s overcome her fair share of struggles: not only is she an African-American woman in the wine industry, which is exceedingly rare, but she’s a cancer survivor. Plus, her former business, a Chicago art gallery and bar, suffered a flood that left her with nothing.