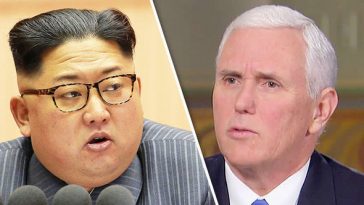 Kim Jong-un would be making a “great mistake” if he believed he could “play” Donald Trump when they meet next month, Mike Pence, the US vice president, has warned.

The president is willing to walk away from the unprecedented summit with the North Korea leader after the regime called the meeting into question last week, Mr Pence said.

He told Fox News the isolationist state should not attempt to seek concessions from the US for promises it does not intend to keep.

“It would be a great mistake for Kim Jong-un to think he could play Donald Trump,” Mr Pence said, according to excerpts of an interview made available by Fox.

When he was asked if Mr Trump could still walk away from the summit, scheduled for 12 June in Singapore, he replied: “Well there’s no question.”

Mr Moon’s visit to the White House was originally planned to fine-tune a joint strategy for dealing with the North Korean leader, but it has now instead become more of a crisis session after North Korea threatened to pull out of the summit.

Nine years after Libya’s former leader, Muammar Gaddafi, agreed to dismantle his nuclear programme in return for the lifting of sanctions in 2003, he was overthrown and slain by Western-backed rebels.

Mr Trump has insisted he remains committed to the summit, but has warned in the past it might not take place or he could walk out if it looked like a deal was not possible.

If the summit is cancelled or fails, it would be a major blow to what many supporters of Mr Trump hope will be the biggest diplomatic achievement of his presidency.