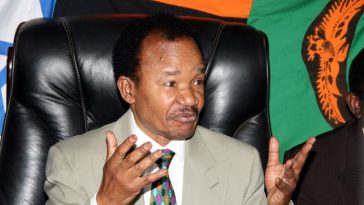 The son of former Zambian president Frederick Chiluba has appealed an eight-month prison sentence handed to him earlier this month for stealing a mobile phone.

The court heard how he stole the device from a woman, Brenda Chisha, on 2 September 2017, before trading it for drugs in a notorious slum in the country’s capital, Lusaka.

Chiluba, 32, a retired officer in the Zambia Air Force, has now filed a notice of appeal in the High Court.

He has also applied for bail pending appeal.

“If bail is not granted, I am going to suffer prejudice and injustice as there is a possibility of serving the substantial part of the sentence before the appeal is heard, thereby rendering my appeal an academic exercise and of no purpose,” he said.

The country’s public prosecutor Cyprian Phiri however objected to the application of bail, arguing that there were no exceptional circumstances to warrant it.

He said the prosecution had not seen any ground which would merit a successful appeal.

The court will make a decision on Friday.