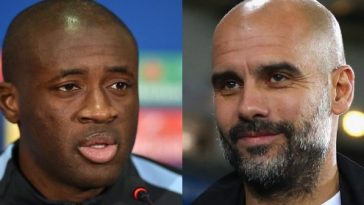 While taking part in a golf tournament organized at the PGA Caldes Malavella (Girona), Pep Guardiola, Manchester City coach took the opportunity to speak on sports news. The Spanish technician came back on recent accusations made by midfielder Yaya Toure. The Ivorian had hinted to the press that Pep Guardiola was racist and that he still had problems with African players.

During an interview he gave to France Football  the Catalan technician came back on the words of Yaya Toure. He just said he did not comment on Yaya Touré’s comments. ”  I will not comment on what Touré said. I have nothing to say about Toure .

A very subtle way to avoid controversy. Subsequently, Guardiola gave his impressions on the departure of Zidane from Real Madrid :  ”  We have not won three times the Champions League. It’s not for me to judge his decision. What he did is remarkable . Generally, technicians leave because of poor results. What Zidane did is out of the ordinary . he said before continuing, ”  I admire him a lot, he was already one of my idols when he was a player. To leave as it did, it is a little what made Luis Enrique, who gained many titles with a Barça which played marvelously well. We must leave when we judge that it is the moment . “

Regarding the non-selection of Sané at the World Cup with the German team, he said: ”  I have a lot of respect for the German coach, he made his decision based on what he has could observe. He must rest now and return to the same level as this season . ”

Finally, Guardiola commented on the rumors of Neymar at Real Madrid : ”  I know it’s not easy to leave Paris. PSG is the PSG, “he said.