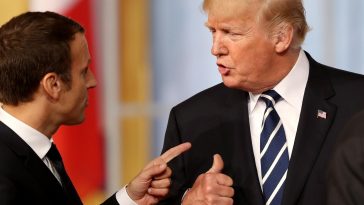 French President Emmanuel Macron has criticised Donald Trump’s “fits of anger” amid a spat over trade at the G7 summit.

The summit, which saw the leaders of the world’s seven of the most powerful countries meet, ended poorly after the US president refused to endorse a joint communique with the other G7 leaders.

However, Mr Macron has responded to the famously outspoken US leader, attacking not only his decisions but his manner of political parlance.

Mr Macron’s office released a statement which said: “International co-operation cannot be dictated by fits of anger and throwaway remarks.

“We spend two days working out a [joint] statement and commitments. We are sticking to them and whoever reneges on them is showing incoherence and inconsistency”.

“Let’s be serious and worthy of our people. We make commitments and keep them.”

The statement added that France and Europe “maintain their support” for the document which says the G7 leaders “acknowledge free, fair, and mutually beneficial trade is a key engine for engine for growth and jobs”, and commits the group to modernise the World Trade Organisation (WTO).

On Twitter president Trump claimed his decision not to sign the communique was due to “false statements at [Mr Trudeau’s] news conference, and the fact that Canada is charging massive tariffs to our US farmers, workers and companies”.

He added: “I have instructed our US reps not to endorse the communique as we look at tariffs on automobiles flooding the US market!”

If the meeting goes ahead it will mark the first time a US president has met with a North Korean leader since the Korean War.