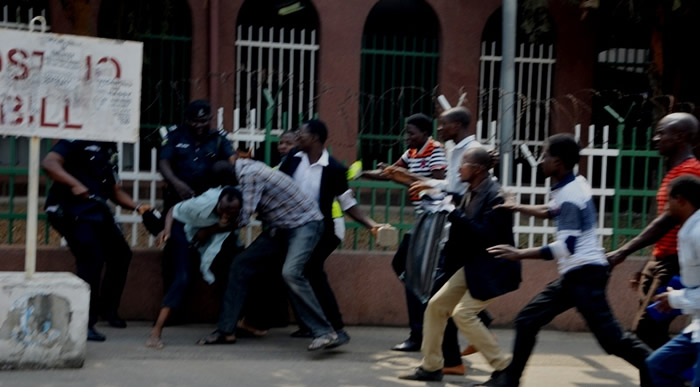 by Alagi Yorro Jallow
I grieve with the people of Faraba bantang in the Kombo East: The build-up of political and economic crimes in the Gambia has not only left many in anger and unspeakable poverty, but a tiny percentage with ballooning stolen wealth has also created deep insecurity and restlessness. The Gambia is at the cusp of a crisis which may lead to a political decay. How this fear and political chaos will unfold will depend on how President Adama Barrow handles the people's cry for justice.
Fatoumatta: The Gambia government is responsible for the death of two unarmed protesters killed and several others injured while peacefully protesting about sand mining and environmental destruction in their community. These police brutality must be condemned as a crime against human and people’s rights.
At the same time, I'm deeply horrified that the Gambia stood on the wrong side of history (again) while this is happening in a new-found democracy hailed by the entire world. President Adama Barrow must have learned from his predecessor’s bestiality of police brutalization when trigger happy security officers killing and brutalizing unarmed civilians.
Fatoumatta: When a government begins to go down the path of killing its own citizens the way Adama Barrow’s government is doing, imitating the past government of Yahya Jammeh’s playbook, shifting blame is usually the first tactic in patching up a crumbling image. Protesters always provide a soft target for regimes gone rogue. Among them have been a few angry young men and women protesting injustice and destruction of their community. No matter how much you wish it, those protesters, they do NOT make a militia. They are simply unarmed young men and women tired of getting killed, tired of living at the bottom of the barrel, tired of their votes never count. The government has enough force to arrest those who destroy property and take them through due process. But instead, this government kills them, kills young people in their homes, kills people going about their own business, beat young and old people with tear gas. Are these people enemy combatants belonging to a militia?
Fatoumatta: In this new political dispensation, Gambians do not need police brutalization, governance by bestiality and mistreatment meted on innocent Gambians. We do not need this police brutalization, governance by bestiality and mistreatment meted on our friend on the people of Faraba bantang village;we do not need this police brutalization, governance by bestiality and mistreatment meted on fellow citizens whose views we do not agree with; we do not need this police brutalization, governance by bestiality and mistreatment meted on the poor; we do not need this police brutalization, governance by bestiality and mistreatment meted on environmental and political activists; we do not need this police brutalization, governance by bestiality and mistreatment meted on monkeys even!
President Barrow this police brutalization, governance by bestiality must stop this! You must end it. You must not even imagine using such tactics.
More importantly though, these beasts must be brought to book. It cannot be that we rave about this and it is all forgotten…with time.
Fatoumatta: Government must identify these, it's agents, strip them of their public service employ and place them under the hammer of justice. Faraba banta ' honestly do not deserve bestiality. Gambian need answers and justice!
Fatoumatta: President Barrow and his combined security must stop the killings of innocent people. The value of human life must be greater than political and ethnic loyalties. Today, the Para-military killed two unarmed citizens of Faraba Banta, opened fire on protesters and several others wounded: The Gambia’s combined security forces, especially the Para-military must be retrained and reoriented on crowd control and community policing in a democracy.
Fatoumatta: Gambians wish to see nonviolent change that will bring economic, social and political justice. Most of all, we call for the immediate end to the killings of innocent people, the police brutality being perpetrated on Gambians, a vice that continues to happen up to this moment must ceased. Political and communal violence has become a vicious circle that occurs in the Gambia since the killing of Haruna Jatta last year.
The leadership of the coalition of human rights lawyers and activists should commit to supporting (materially) the immediate dependents of those killed in Faraba. They died for a cause not advocated by any political party, protested to protect their environment they believed in. In death, they are more loyal to their community than a politician.
Civil society groups should assist the families of the deceased with pro bono legal assistance to pursue justice and compensation for those whose deaths may have resulted from bullets or unlawful use of lethal force by the police.
Solidarity is two-way, Mr. President.

Gambia Government Is Responsible for the Faraba Deaths!