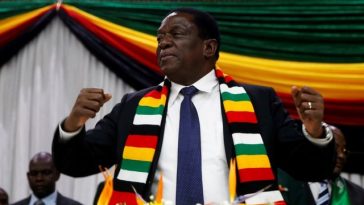 An explosion rocked a stadium in Zimbabwe where President Emmerson Mnangagwa was addressing a political rally on Saturday, his spokesman said, adding the head of state was unhurt and taken to safety.

“There has been an incident at Bulawayo (White City Stadium) where the president was addressing a rally. This is now a police issue but the president is safe at Bulawayo State House,” spokesman George Charamba told Reuters.

“We are still to get information on what exactly happened as we understand that some people could have been injured as this happened in the VIP tent.”

Footage from Zimbabwe state television showed the explosion took place near Mnangagwa as he waved to supporters.

Mnangagwa was speaking at his first rally in the second city of Bulawayo, an opposition stronghold where the ruling ZANU-PF has not won in national elections since 2000.

Zimbabwe holds its presidential election on July 30, with 75-year-old Mnangagwa and 40-year-old Nelson Chamisa, the leader of the opposition Movement for Democratic Change, the main contenders.

Opinion: Building the New Gambia: Protests and The Police