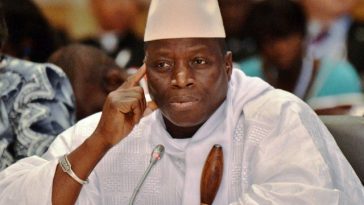 Yahya Jammeh no longer sleeps in both ears. As a matter of fact, the Ghanaian government is studying the extradition of the former Gambian president, which would deal with the massacre of more than 50 West Africans killed in 2005.

Hosted by Equatorial Guinea, he would be compelled to justify the disappearance of Ghanaian, Nigerian, Ivorian and Senegalese nationals in 2005. To clarify this matter, Ghana has opened a file with his Ministry of Foreign Affairs. Thus, It is the Minister of Information of Ghana, Mustapha Abdul Hamid who makes the announcement. In a statement to the media, he said,
“Human Rights Watch, along with Trial International, has uncovered new evidence that, according to the organization, involves former Gambian President Yahya Jammeh in the murder of the 44 Ghanaians killed July 22, 2005 “.

The families of the victims relieved After the announcement of the lawsuit of Yahya Jammeh, the Gambian victims push a sigh of relief.

“It is not only the Ghanaian victims who want to see progress in this case,” said Fatoumatta Sandeng, spokesman for the “Campaign to bring Yahya Jammeh and his accomplices to justice”.

“We, the Gambian victims, consider that this is the beginning of the process which aims at forcing Jammeh to answer for the crimes which are reproached to him,” she relieves herself.

In a May 16th report from Human Rights Watch and Trial International, it emerged that more than 50 migrants including 44 Ghanaian and 2 Senegalese were killed in 2005 by a military unit called the “Jungles” and controlled by Yahya Jammeh.

In this document, they index Yahya Jammeh as being at the origin of these deaths.

A few months earlier, the current Gambian President, Barrow, had indicated that he would seek an extradition from Equatorial Guinea if, however, the Truth, Reconciliation and Reparations Commission recommended prosecution.

In addition, the Gambian government and activists believe that the time is not yet fair for Jammeh, in the sense that the political, institutional and security conditions are not met.

Liberia – Vice President Jewel Howard-Taylor Must Be Stopped In Her Tracks, Now