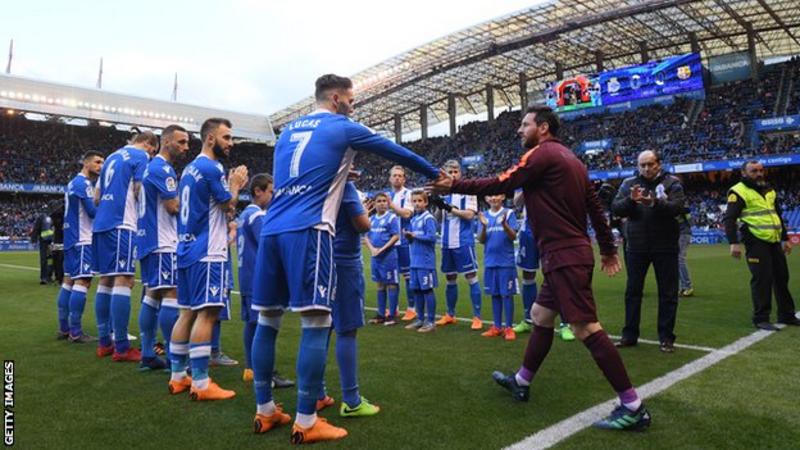 Barcelona have won the Spanish league title in convincing style but they will need to make some significant changes if they are to mount a serious European challenge next season.

A Lionel Messi-inspired 4-2 victory at Deportivo La Coruna on Sunday sealed a seventh La Liga crown in 10 seasons after giving the Catalan giants an unassailable 11-point lead over second-placed Atletico Madrid with three games to go.

It has been an outstanding domestic campaign for double-winning Barca, who entered the season surrounded by uncertainty as new coach Ernesto Valverde arrived to steady a ship which had often looked in danger of sinking in the latter stages of predecessor Luis Enrique's reign.

Valverde has certainly succeeded in that aim, with his team on track to become the only Spanish side to go through an entire league season without defeat and having won the Copa del Rey with a sumptuous 5-0 thrashing of Sevilla last weekend.

However, there is still a sense that the season is a missed opportunity after the Champions League last-eight exit against Roma, when Barca squandered a 4-1 first-leg advantage with an implosion that midfielder Sergio Busquets described as his worst experience in football.

It was their third European quarter-final elimination in a row and, more worryingly, the 3-0 loss in Italy was no freak occurrence.

Barca have not won a knockout Champions League game away from home since beating Arsenal in 2016, and the defeat by Roma was very similar in nature to heavy losses at Paris St-Germain (4-0) and Juventus (3-0) last season.

To prevent a repeat next year, changes are required.

Iniesta out – Coutinho and Dembele to step up?

One major departure will be iconic club skipper Andres Iniesta, who will end his glorious Nou Camp stay at the end of the season after nearly 700 appearances and 32 trophies by accepting a lucrative move to China as his career begins to wind down.

The huge gap left should be at least partly filled by two recent signings, who cost nearly £300m combined but did not feature in the disaster against Roma, with Philippe Coutinho cup-tied and Ousmane Dembele left on the bench until the last few minutes.

Coutinho has settled impressively during his first few months at the club, with an assist for ex-Liverpool team-mate Luis Suarez and a goal from the penalty spot in the Copa del Rey final underlining his positive start to life in Spain.

However, the big question is where exactly the 25-year-old Brazilian will fit into the team in the long run.

In his 17 games so far, he has lined up on both flanks and in a more central midfield role. There is an obvious spot for him as the direct replacement for Iniesta but that would require him to subdue his attacking instincts and play deeper than he would naturally prefer.

By contrast, it has been an unquestionably poor first season for skilful winger Dembele, not helped by the former Borussia Dortmund starlet missing more than three months of action with a thigh injury just after the season started.

The 20-year-old France international has shown moments of attacking brilliance, notably a fine strike against Chelsea in the Champions League last 16, but often looks out of place in the team's structure and has committed too many mistakes defensively.

In two of his recent outings, Dembele gave away a penalty with a rash challenge against Valencia and needlessly conceded possession against Celta Vigo to spark a counter-attack that led to the dismissal of Barca defender Sergi Roberto, who was forced into a professional foul to prevent a clear breakaway.

That kind of sloppy play is exactly why Valverde did not trust Dembele to start against Roma, and the forward must urgently work on his mental discipline and defensive awareness to smooth off his rough edges if he wants to be a bigger factor next season.

Coutinho and Dembele combined nicely for the opening goal in Sunday's win at Deportivo, with the Frenchman providing a neat pass for Coutinho to finish well, and Barca will be hoping that combination is seen a lot more regularly next season.

Griezmann and more coming in?

Irrespective of how much Dembele and Coutinho contribute next season, however, there is still a strong feeling that Barca need to significantly improve the depth of their squad to mount a serious European challenge.

The Champions League exit at Roma has been widely blamed on a lack of rotation by coach Valverde, who has been accused of over-playing crucial men such as Iniesta, Suarez, Busquets, Gerard Pique and Lionel Messi with the consequence that they were jaded for the latter stages of the campaign.

The flipside, however, is that Barca would have struggled to pick up so many points in La Liga if Valverde had regularly left out those key performers, considering the sharp drop-off in quality between those players and their replacements in reserve.

To address that issue, Barca are reportedly keen to secure France frontman Antoine Griezmann by paying his 100m euro (£87.7m) release clause from Atletico Madrid. If Dembele and Coutinho also step up, Griezmann's arrival would give Valverde a much bigger range of options to complement Messi and Suarez in attack.

There will also be a freshen-up in midfield, with highly-rated Brazilian playmaker Arthur set to arrive in a 30m euro (£26.3m) deal from Gremio.

More new faces are also on the cards, but first Valverde will have to ship out some of the current second-stringers he has rarely used, such as striker Paco Alcacer, midfielders Denis Suarez, Aleix Vidal and Andre Gomes, and France full-back Lucas Digne.

In the longer term, a big concern is that the supply of players from the club's famed 'La Masia' academy has recently dried up.

It is not long since Barca regularly fielded an entire XI of home-grown players, but nobody has progressed from the youth system to become a first-team regular since Rafinha five years ago, and even he has subsequently departed to Inter Milan.

An indication of La Masia's difficulties in producing first-team players came in April's 2-2 draw at Celta Vigo, when Barca fielded a starting line-up containing no youth graduates for the first time in 16 years.

However, the club's Under-19s won this season's Uefa Youth League, beating Manchester City in the semi-finals and Chelsea in the final, and hopes are high that some members of that squad – notably ball-playing midfielder Riqui Puig and striker Abel Ruiz – will soon provide another burst of home-grown talent.

Thankfully for Barcelona, Messi is still playing as well as ever and it can even be argued that his feat in inspiring the relatively mediocre current squad to an easily gained league title is the greatest achievement of his career.

On Sunday, he became the first player to ever score 30 or more La Liga goals in seven different seasons – with a hat-trick to clinch the title.

Whereas Messi in his younger days was complemented by the dominating midfield trio of Busquets, Xavi and Iniesta in their prime, now there is a much weaker infrastructure behind the Argentine's brilliance and he has consequently been forced to become a playmaker as much as a goalscorer.

And although the 30-year-old has lost some of his pace, Messi has developed into a more complete player than he was in the past, playing deeper than ever to take over Xavi's mantle as the controller of the game's tempo and rhythm as well as being the chief goalscorer.

Interestingly, this season has been the first time at club level that he has been able to play in his preferred position as the 'enganche' – the traditional 'number 10' behind a centre forward.

In the past he has played as a false nine or a right-sided forward, but Valverde has lined him up behind Suarez with the freedom to drop deeper and associate play from midfield.

Messi's evolution into a creative midfielder and a striker at the same time is evidenced by the stats: he leads La Liga this season in goals (32 goals), assists (12), chances created (81) and secondary assists (passes leading directly to an assist: nine).

With Messi playing so well and showing no signs of slowing down, Barca will clearly remain strong. But to maximise their chances in Europe, which will be next season's focus, they really need to surround him with a stronger supporting cast.