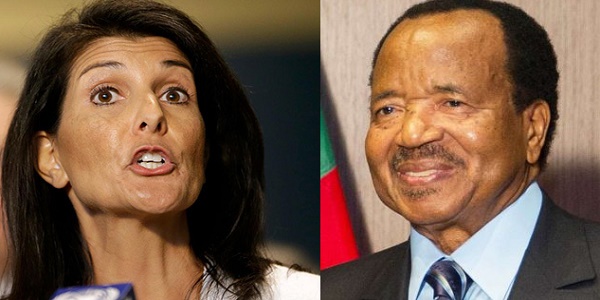 Nikki Haley, the US ambassador to the United Nations, recently put the problem of the Anglophone crisis on the table of the UN. After presenting a series of accusations, she issued an ultimatum in which she asked the Cameroonian authorities to immediately stop the repression of the civilian population. It also calls on them to respect human rights, freedom of expression and, above all, to carry out “credible investigations” into allegations of massacres of civilians in the south-west and north-west of the country.

Nikki Haley demanded the release of detainees imprisoned as part of this crisis. The one remembers that last year, when the US diplomat was asked about the situation in Cameroon by our colleague Matthew R. Lee of ” Inner City Press ‘, it stated that it had no information on this country.

The recent release of Peter-Henry Balerin, Ambassador of the United States in Cameroon, where it was asking Biya not to stand as a candidate in the next presidential will undoubtedly pushed the American diplomat at the United Nations to have a attentive ear on the Anglophone crisis in Cameroon.

The Americans could intervene in Yaoundé if the conflict continues, perhaps without seeking the approval of France, the dominant power in this country of French-speaking Africa.

It is this dramatic event that may have caused the decent of the Rapid Intervention Battalion (Bir) in Manyu, the region that has suffered the greatest exodus to the neighboring Nigerian state.