Anticipation had been high throughout the week after the announcement that Ethiopian Prime Minister Abiy Ahmed was to visit Eritrea and meet President Isaias Afwerki. 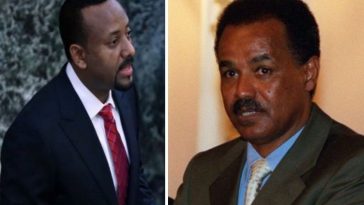 This is the first time the leaders of the two countries meet after nearly two decades. The PM was accompanied by the Speakers of Parliament and the House of Federation, Muferiat Kemal & Keira Ibrahim.

The two countries had been at loggerheads since 1998 when a border war at Badme broke out. The peace process of 2000 did not bear any fruit, putting the two states at an impasse.

The airspace and communication between the two countries had been closed, meaning natives had to travel to either country through a third country and use third-party communication as they were unable to make direct calls.

Reports, however, indicate that Eritreans and Ethiopians are now able to make direct phone calls to each country.

The recent announcement by PM Ahmed indicating that Ethiopia will honour the Algiers Agreement of 2000 was met with shock, surprise and even cynicism. It also paved way for the Eritrean delegation to visit Addis Ababa for discussions over the deal.

Before the visit by PM Ahmed, the streets of Asmara, Eritrean Capital was lined with Ethiopian and Eritrean flags.

It would be the first time in 20 years for the Ethiopian flag to fly at an official capacity in Eritrea.

The meeting between the two leaders will be broadcast by Eritrea’s national broadcaster.

he visit is also believed to be one of the many that will see the two countries overcome years of mistrust and to chart a way towards peace.