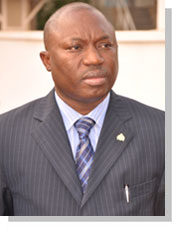 The president of the Republic of The Gambia HE Adama Barrow has appointed Mr. Mambury Njie, former Managing Director of Gam Petroleum and one-time minister under former president Yahya Jammeh's regime, as the country's new Finance minister. Njie's appointment was earlier announced yesterday, June 29, 2018 during a major Cabinet reshuffle effected by the president but a public notice was later issued by the State House, informing the general public that his appointmnet was not yet confirmed.

Below is a copy of the release issued today.