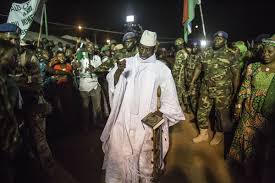 Let us tell Seedy Njie that he cannot control the narrative about the actions and inactions of Yaya Jammeh. Seedy Njie has no capacity in any way to attempt to cleanse Yaya Jammeh against the overwhelming evidence of the atrocious nature of that regime. He will only serve to destroy his own soul if he seeks to defend the indefensible.

Let Seedy understand that the issue of Yaya Jammeh is about the life and soul of the Gambia. Let Seedy enjoy his politicking freely and openly, thanks to Gambians, but let him not seek to ridicule, mock and dishonour the lives and dignity of Gambians. No amount of democracy or partisan politics should make a human being toy with the very lives of fellow human beings. Because of Yaya Jammeh, hundreds of Gambians and non-Gambians have been killed and hundreds more live in pain and misery today.

For anyone to come out openly to celebrate such a despicable despot and his regime is the height of imbecility and self-destruction. Yaya Jammeh is merely a dishonest, corrupt and unfortunate son of the land who betrayed the trust of the people, abused our institutions and plundered our resources and then used them to torture, rape and kill fellow human beings. No decent human being must laugh about that much more seek to cleanse such a murderer in the face of his victims. It is callous, unpatriotic and immoral.

If Yaya Jammeh knew that he was innocent of the murder of those West Africans why then would he compensate for a crime of which he was innocent? Yaya Jammeh was not required to compensate, rather what he was required to do was to ensure accountability. Since 2005 his Government never took anyone to court for the murder of those human beings. We know that those victims were arrested and detained by state agents from the Navy and the police and then handed over to the Junglers who killed them.

The only person who could give such orders was Yaya Jammeh. If he had not given the orders then he should have stopped the killings. But he did not. He had the legal authority and obligation to bring perpetrators to justice but he also never did that even though he knew who the perpetrators were.

To therefore hear Seedy Njie hide behind the so-called agreement and compensation to attempt to cover up for Yaya Jammeh only serves to further expose this despot. UN and ECOWAS did not agree with Yaya Jammeh on anything about that crime. The UN and ECOWAS only came to investigate but Yaya Jammeh’s government refused to cooperate and only gave them a false narrative. The UN or ECOWAS cannot do anything more but to go back with what Yaya Jammeh gave them that his government was not involved in the killings.

The idea of compensation was Yaya Jammeh’s diabolical and unintelligible idea; thinking that he can fool people that he has a sense of humanity. Those families do not need compensation. They need justice. Therefore let Seedy Njie know that he cannot control the narrative anymore in the Gambia particularly in his false and disgraceful attempt to defend and justify the atrocities of a tyrant. Seedy is too little to carry such a job.

Gambia: I have no presidential ambition – Talib Bensouda