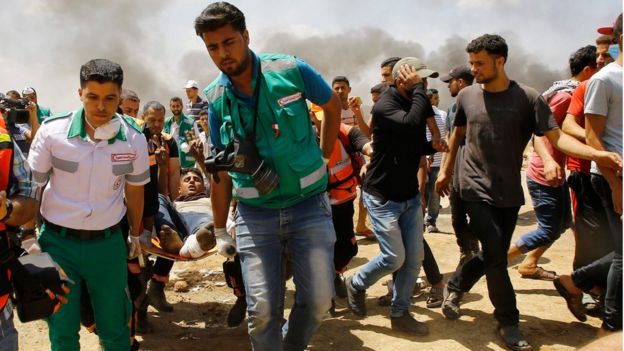 At least 43 Palestinians have been killed and 2,200 wounded by Israeli troops, Palestinian officials say, on the deadliest day of violence since the 2014 Gaza war.

The violence came as the US opened its embassy in Jerusalem, a move that has infuriated Palestinians.

They see it as clear US backing for Israeli rule over the whole city, whose eastern part Palestinians lay claim to.

But US President Donald Trump hailed the move in a video message.

He told the dedication ceremony that it had been a "long time coming", adding: "Israel is a sovereign nation with the right to determine its own capital but for many years we failed to acknowledge the obvious."

The US, he added, remained "committed to facilitating a lasting peace agreement".

What happened at the border?

The health ministry, run by Gaza's Islamist rulers Hamas, said children were among those killed on Monday.

The Hamas-led demonstrations are part of a six-week protest dubbed the "Great March of Return". 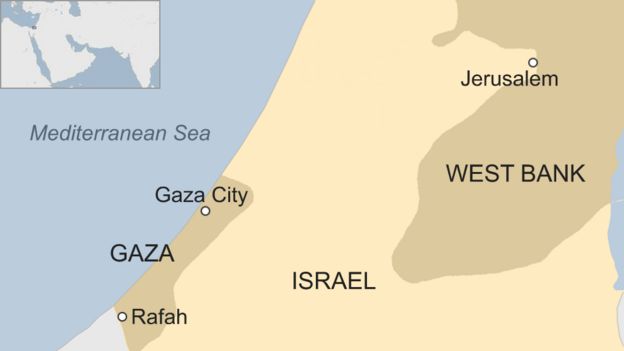 Image caption Hundreds of people have been injured, according to Palestinian officials

Israel says the protests are aimed at breaching the border and attacking Israeli communities nearby.

The Israeli military said 40,000 Palestinians had taken part in "violent riots" at 13 locations along the Gaza Strip security fence.

It said the Israeli military had killed three people trying to plant explosives near the security fence in Rafah. Aircraft and tanks had also targeted military positions belonging to Hamas in the northern Gaza Strip, it said.

There have also been violent clashes between Israeli police and protesters who raised Palestinian flags outside the new embassy. Several protesters were detained.

What led to the Gaza protests?

Palestinians have held weekly protests in the run-up to their annual commemoration of what they call the Nakba or Catastrophe, when hundreds of thousands of their people fled their homes or were displaced following the foundation of the Israeli state on 14 May 1948.

Scores of Palestinians have been killed since the protests began. Thousands more have been wounded.

Hamas, which is in a state of conflict with Israel, had said it would step up protests in the lead-up to Tuesday, the official Nakba commemoration.

It says it wants to draw attention to what Palestinians insist is their right to return to ancestral homes in what became Israel.

"Today is the big day when we will cross the fence and tell Israel and the world we will not accept being occupied forever," a science teacher in Gaza, Ali, told Reuters news agency. 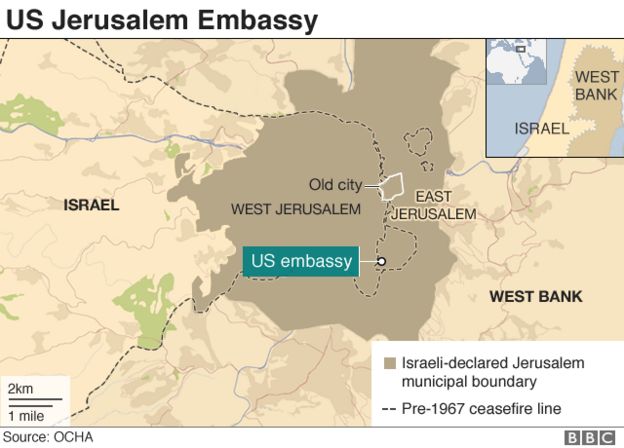 What was opened and who attended?

A small interim embassy will start operating from Monday inside the existing US consulate building in Jerusalem. A larger site will be found later when the rest of the embassy moves from Tel Aviv.

The opening ceremony was brought forward to coincide with the state of Israel's 70th anniversary.

Mr Trump's daughter, Ivanka, and her husband Jared Kushner, who are both senior White House advisers, joined US Treasury Secretary Steven Mnuchin and Deputy Secretary of State John Sullivan for the ceremony.

After Ivanka Trump had unveiled the seal of the embassy, Mr Kushner said in his address: "When President Trump makes a promise he keeps it… We have shown the world that the US can be trusted. We stand with our friends and allies."

Israeli Prime Minister Benjamin Netanyahu said: "What a glorious day. Remember this moment. This is history. President Trump, by recognising history, you have made history. All of us are deeply grateful."

A spokesman for Palestinian Authority President Mahmoud Abbas said on Monday: "With this step, the US administration has cancelled its role in the peace process and has insulted the world, the Palestinian people and the Arab and the Islamic nation and it has created incitement and instability."

Arab League chief Ahmed Abul Gheit said it was "shameful to see countries participating with the US and Israel in celebrating the former's embassy move to occupied Jerusalem in a clear and grave violation of international law".

Why is the embassy move so controversial?

The status of Jerusalem goes to the heart of the Israeli-Palestinian conflict.

Israeli sovereignty over Jerusalem is not recognised internationally and, according to the 1993 Israel-Palestinian peace accords, the final status of Jerusalem is meant to be discussed in the latter stages of peace talks.

Israel has occupied East Jerusalem since the 1967 Middle East war. It effectively annexed the sector, though this was not recognised by any countries until Mr Trump's declaration in December 2017.

Media captionWhy the ancient city of Jerusalem is so important

Since 1967, Israel has built a dozen settlements, home to about 200,000 Jews, in East Jerusalem. These are considered illegal under international law, although Israel disputes this.

Various countries once had embassies based in Jerusalem but many moved after Israel passed a law in 1980 formally making Jerusalem its capital.

A boost for Netanyahu

The embassy move is the culmination of one of the best weeks in the political life of Mr Netanyahu.

First President Trump kept his promise to pull out of the Iran nuclear deal. Now the US embassy is moving.

Placards in Jerusalem praise Mr Trump. The local football club, Beitar, infamous for fans who chant "death to Arabs", has included "Trump" in its name.

The embassy move has been rejected by the main allies of Israel and the US. Palestinians are protesting in their thousands in Gaza.

It is much more low-key in the West Bank, including occupied East Jerusalem.

The embassy move is good for the Netanyahu government, good for President Trump's base and makes most Israelis pleased but there is no evidence to back Mr Netanyahu's claim that it is good for peace

Gambia – Darboe:APRC knew UDP was cancer to its demise