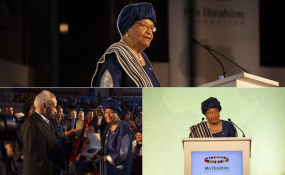 Kigali — Former President talks of pride that, after decades of conflict, power in Liberia now rests with its people, grounded in the rule-of-law and upheld by institutions

Speaking to guests from Rwanda and around the world, President Sirleaf said: "I’m honoured to be this year’s recipient of the Ibrahim Prize for Achievement in African Leadership. I receive this distinction on behalf of the many women and men who helped to navigate the profound complexities of the post-conflict country that is Liberia. As the first woman to receive this award, it is my hope that women and girls across Africa will be inspired to break through barriers, and push back on the frontiers of life’s possibilities.”

The Ibrahim Prize recognises and celebrates excellence in African leadership. It is a US$5 million award paid over 10 years, and US$200,000 annually for life thereafter.

Presenting the Prize to President Sirleaf, Salim Ahmed Salim, Chair of the independent Prize Committee, said: “Madame Sirleaf embodies the type of role model the Prize is intended to honour. It recognises not good leaders – of which Africa has many – but truly exceptional figures, who, by their nature, are rare. We are looking for leaders who leave their country in a far better state than when they took office, who have strengthened the trust of their fellow citizens in state and leadership, and who have built a strong legacy.”

Praising President Sirleaf, H.E. Alassane Ouattara, President of Cote d’Ivoire, said: “Her contribution spans way beyond Liberia. The people of Côte d’Ivoire, for example, will never be indebted enough to her. During the post-election crisis in Cote d’Ivoire, President Sirleaf was a constant voice of moderation, receiving hundreds of thousands of Ivorians in Liberia, and always trying to find lasting and peaceful solutions.”

TRRC will be different in Gambia – Dr. Jallow