68-year-old Saudi Arabian Prince, Sultan Bin Salman, has tied the knot with a 25-year-old lady at an extravagant marriage ceremony after the prince was reported to have paid $50million as bride price.

Multiple online reports claim that the bride who is believed to be from the United Arab Emirates, receieved numerous multi-million dollars gifts for her lavish wedding. 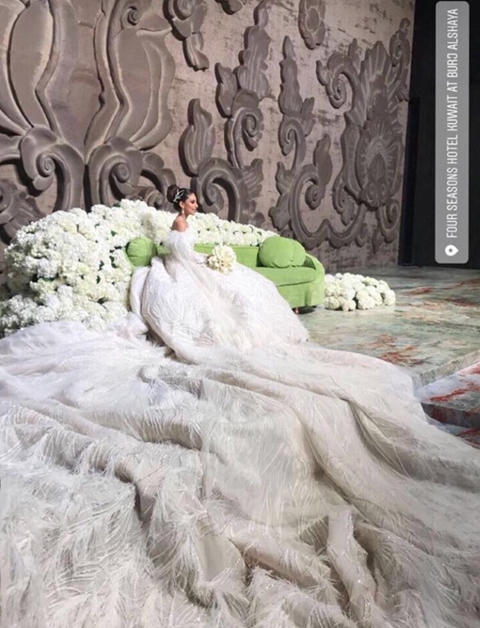 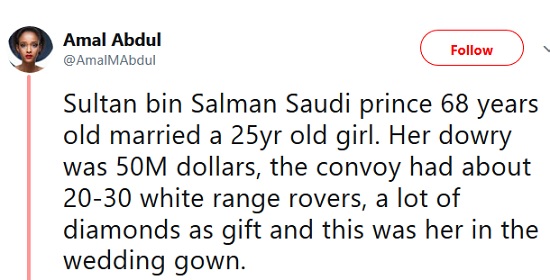 A Twitter user, Amal Abdul revealed online that the Emirati lady was given diamonds and other precious stone jewelries as gift.
The wedding convoy also reportedly had between 20-30 white Range Rovers and no fewer than 30 large boxes were offloaded from a white luxurious bus to be presented to the bride’s family.
A chariot filled with gifts for the bride and her family was also seen at the venue of the wedding.
Sultan Bin Salman was born on June 27, 1956, he is the second son of King Salman bin Abdulaziz Al Saud. He has three children. He earned a master’s degree in social and political science at Maxwell School of Citizenship and Public Affairs, Syracuse University, USA in 1999.
He enjoys skiing, flying, photography, architecture, reading, and travel.
Culled from Howafrica.com