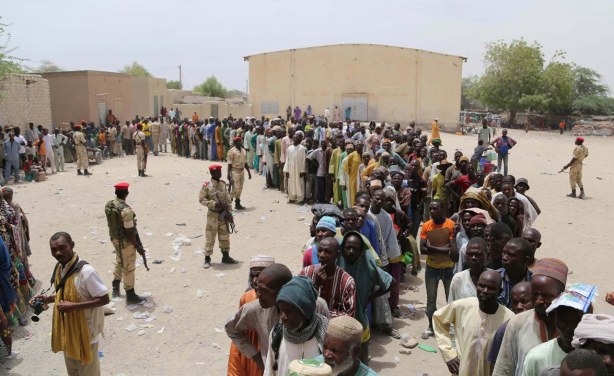 The UN says it has allocated $11 million (about N4 billion) to help 60,000 internally displaced people in Borno and other humanitarian operations in North-east Nigeria.

The UN Office for the Coordination of Humanitarian Affairs (OCHA) said $9 billion (about N3.2 billion) would be used to provide life-saving aid for some 60,000 people displaced by ongoing Boko Haram crisis in Borno.

The UN relief agency explained that the money was an allocation from the UN-managed country-based humanitarian assistance fund.

The UN quoted Edward Kallon, the UN Humanitarian Coordinator in Nigeria, as saying: "The crisis continues to displace thousands of vulnerable women, children and men every week.

"Many have gone through unspeakable hardship and the UN and its partners remain committed to help alleviate their suffering."

Set up through the Nigeria Humanitarian Fund (NHF), the assistance includes two million dollars (about N720 million) in support to the UN Humanitarian Air Service for frontline responders in the region.

"This UN fund gives us the flexibility to prioritise those who are most in need of aid and act swiftly for the good of the people of North-east Nigeria," Mr Kallon said.

The UN said the North-east region's humanitarian crisis, sparked mainly by Boko Haram's years-long insurgency, remained one of the most severe globally.

"In the worst-affected states of Borno, Adamawa and Yobe, at least 7.7 million people are in need this year, with about 80 per cent, or 6.1 million, targeted for humanitarian assistance.

"In just three months, the close to 30,000 people who have fled violence in hard-to-reach areas are in dire need of food, water, shelter, clothes and medical services.

"Additionally, the funds will help scale up the response near the border with Cameroon in eastern Borno – Gwoza, Bama, Dikwa, Kala-Balge, Monguno, Askira/Uba – and northern Adamawa – Madagali – where approximately another 30,000 have arrived following military operations.

"Finally, the funds will also help maintain UN Humanitarian Air Service operations, crucial to reach and deliver aid in remote areas of the North-east, especially where roads are unusable," the UN said.

It explained that under the leadership of Kallon, the UN Humanitarian Coordinator in Nigeria, the NHF is managed by the UN Office for the Coordination of Humanitarian Affairs (OCHA).

This is to provide flexible and timely funds for basic life-saving support, the UN said, adding to date it has raised $48 million (over N17 billion) in contributions and pledges.

The NHF is one of 18 country-based pooled funds and was launched during the Oslo Humanitarian Conference for Nigeria and the Lake Chad Region in February 2017.

The contributions and pledges were realised through the generous support of Sweden, Germany, the Netherlands, Denmark, Belgium, Norway, Ireland, Switzerland, the Republic of Korea, Canada, Spain, Luxembourg, the Arab Gulf Program for Development, Malta, Azerbaijan and Sri Lanka.

Of that $48 million, $33 million (about N12 billion), including this latest N3.2 billion allocation – has now been allocated to various organisations in support of the humanitarian response in North-east Nigeria.

Kenyan opposition figure says he was drugged when deported