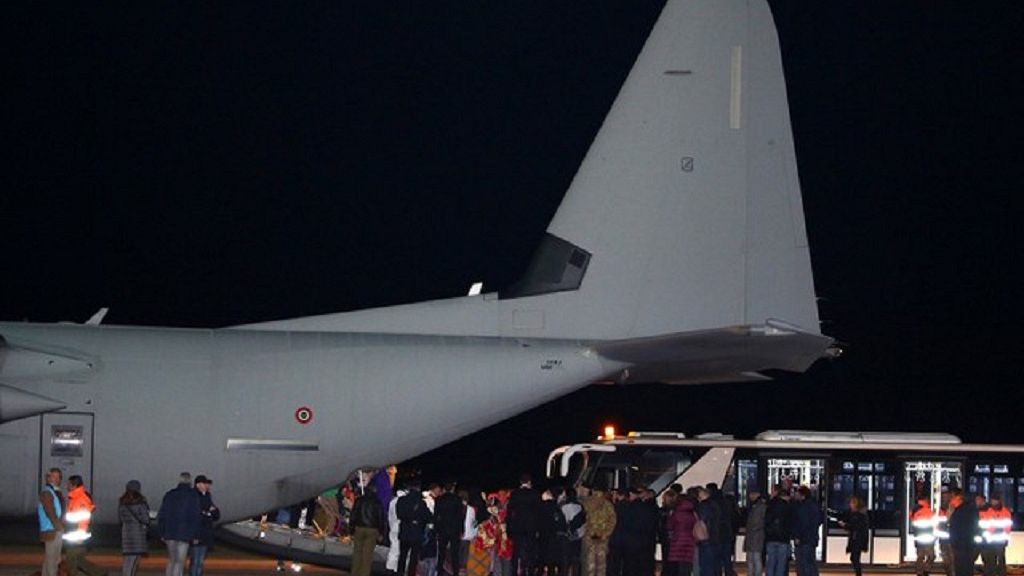 Dec 24, 2017 — The United Nations began bringing African refugees to Italy from Libya on Friday, evacuating them from detention centres whose conditions have been condemned by humanitarian groups as inhumane.

It is the first time the U.N. High Commissioner for Refugees (UNHCR) in Libya has evacuated refugees directly to Europe.

“We really hope other countries will follow the same path,” Vincent Cochetel, UNHCR’s Special Envoy for the Central Mediterranean, said in a statement after the first plane arrived.

An Italian C-130 military plane landed at an airport south the capital carrying 110 women and children, and a second flight is expected to bring more than 50 people later in the day.

The African migrants, including many small children, were covered in blankets or bundled in coats as they disembarked from the plane on a chilly evening.

“Some of those evacuated suffered tremendously and were held captive in inhumane conditions while in Libya. Five of these women gave birth while in detention, with only the very limited medical assistance,” Cochetel said.

Italy’s move to open a safe corridor for some of the migrants follows criticism by rights groups who have condemned the country’s efforts to block migrants in Libya in exchange for aid, training and equipment to fight smuggling.

“This should be a point of pride for Italians,” Interior Minister Marco Minniti told reporters on the tarmac. “This is the just beginning. We will continue to try to open this humanitarian corridor.”

Italy’s Catholic Church will house many of the new arrivals in shelters across the country, Church charity Caritas said, as the migrants from Eritrea, Ethiopia, Somalia and Yemen go through the country’s asylum request process.

Hundreds of thousands of migrants have fled conflict or poverty at home and are now trapped in Libya, where they had hoped to pay people smugglers for passage to Europe via Italy.

The UNHCR estimates about 18,000 people are being held in detention centres for immigrants that are controlled by the Tripoli government and it aims to evacuate as many as 10,000 next year.

Migrant smuggling has flourished since the overthrow of Muammar Gaddafi in 2011, with more than 600,000 making the perilous journey across the central Mediterranean in four years.

However, migrant arrivals to Italy have fallen by two-thirds since July from the same period last year after officials working for the U.N.-backed government in Tripoli persuaded human smugglers in the city of Sabratha to stop boats leaving.

Italy is also bolstering the Libyan coast guard’s ability to turn back boats.

The United Nations migration agency and the African Union have also been working to repatriate migrants from Libya to their countries of origin including Nigeria, Niger and Guinea.