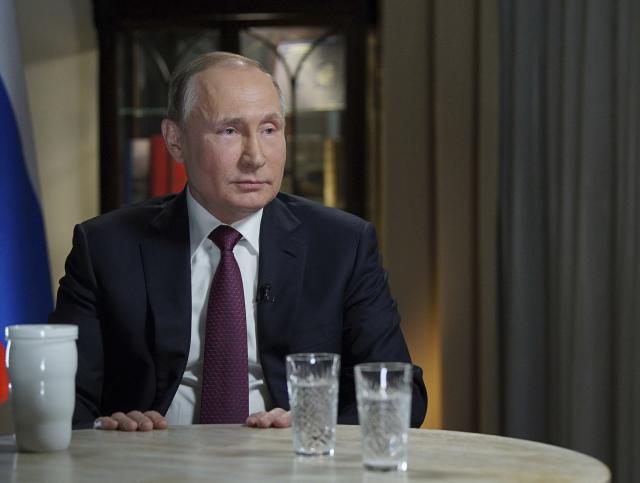 In this photo taken on Friday, March 2, 2018 and released Saturday, March 10, 2018, Russian President Vladimir Putin speaks during an interview with NBC News' Megyn Kelly in Kaliningrad, Russia. In the some times combative interview Putin denied the charge by U.S. intelligence services that he ordered meddling in the November 2016 vote, claiming any interference was not connected to the Kremlin. (Alexei Druzhinin, Sputnik, Kremlin Pool Photo via AP)

MOSCOW (AP) — Vladimir Putin and his Russia look more invincible today than at any other time in his 18 years in power.

Since Putin last faced an election in 2012, Russians have invaded Ukraine, annexed Crimea, blanket-bombed Syria, been accused of meddling in the U.S. presidential election and claimed to have a scary new nuclear arsenal.

"No one listened to us. You listen to us now," he said earlier this month, boasting about those weapons.

Putin will overwhelmingly win re-election as president on March 18, again. So why bother holding a vote at all?

He disdains democracy as messy and dangerous — yet he craves the legitimacy conferred by an election. He needs tangible evidence that Russians need him and his great-power vision more than they worry about the freedoms he has muffled, the endemic corruption he has failed to eradicate, the sanctions he invited by his actions in Crimea and Ukraine.

"Any autocrat wants love," said analyst Andrei Kolesnikov of the Carnegie Moscow Center, and Putin gets that love "from high support in elections."

Expected to win as much as 80 percent of the vote, Putin will further cement his authority over Russia, a czar-like figure with a democratic veneer.

During his 14 years as president and four years as prime minister of the world's largest country, Putin has transformed Russia's global image, consolidated power over its politics and economy and imprisoned opponents. He has offered asylum to Edward Snowden, quieted extremism in long-restive Chechnya, hosted phenomenally expensive Olympic Games and won the right to stage this year's World Cup.

For 19-year-old art history student Maria Pogodina, "Putin is all of my conscious life, and so it's clear I have a lot to say thank you for."

Yet Pogodina worries about some of his policies as she prepares to vote and hopes to see a gradual transformation.

"I am not talking about revolution, no way," the teenager said, summing up the stance of many Russians of all ages. "I hope and believe it won't happen and that we can avoid civil conflict."

The election will confirm Putin's argument that to improve life in Russia, the country needs continuity more than it needs drastic change, independent media, political opposition, environmental activism or rights for homosexuals and other minorities.

Russia will remain disproportionately dependent on oil prices, and its 144 million people will stay poorer than they should be — and many will remain convinced that the world is out to get them.

Putin's most important mission in the next six years will be working out a plan for what happens when his next term expires in 2024: Will he anoint a friendly successor or invent a scheme that allows him to keep holding the reins?

Today's all-powerful Putin bears little resemblance to the man who took his tentative first steps as president on the eve of the new millennium.

Catapulted to power on Boris Yeltsin's surprise resignation as president, Putin walked into his new office Dec. 31, 1999, in a suit that seemed too big for his shoulders. His low-level KGB background made him seem shifty, and many Russians regarded him as little more than a puppet of the oligarchs then pulling the Kremlin's strings.

Russia was still emerging from a tumultuous post-Soviet hangover. Contract killings dominated headlines, its army couldn't afford socks for its soldiers, and its budget was still dependent on foreign loans.

An entire generation has never known a Russia without Vladimir Vladimirovich Putin in charge. And an increasing number of other leaders — President Donald Trump among them — are emulating his nationalist, besieged fortress mentality.

The once-feisty Russian media has fallen silent. Kremlin propaganda now has a global audience, via far-reaching networks RT and Sputnik.

Yet while Putin looks invulnerable on the surface, he has reason to worry.

The Kremlin is lashing out at opposition leader Alexei Navalny's recent investigations of corruption, fearing they could spur public uproar. And the battle for succession threatens to cause damaging splits within Putin's inner circle.

Meanwhile, Russia's disillusioned youth could turn against him. Some have joined Navalny's protests; others just won't bother to vote, quietly sapping his power.

"The international environment is an instrument for him in managing those domestic challenges first and foremost," said Matthew Rojansky, director of the Kennan Institute in Washington. "He can declare something like a Syria intervention or something in the post-Soviet space."

And a newly elected Putin is likely to continue the Cold War-like relationship with Trump's United States.

Russia sees the investigation into alleged meddling in the U.S. election as concocted — but also as a sign that Russia is important again, and that Americans are obsessed with weakening Russia at all costs.

"Does the U.S. treat Russia equally? Does it take Russia seriously? That's an enormously important benchmark" for Russians, Rojansky said. "They are not benchmarking themselves against China."

Ever since a leading U.S. diplomat was recorded giving instructions to Ukrainian opposition figures, Russians have been convinced that Washington caused the Ukraine conflict by messing in Russia's backyard, and that America bears responsibility for the ensuing fighting. It has killed thousands and remains unresolved.

Crimea is framed as Russia's biggest victory in the Putin era, a restoration of might and righting of historical wrongs. To drive the message home, the March 18 election is being held on the fourth anniversary of the takeover.

The last time Putin faced voters, he also was guaranteed victory but was on shakier ground. A movement led by Navalny had brought masses to the streets of Moscow and other cities, as the educated middle class chafed at Putin's backward-looking vision.

Since then, Navalny has been arrested repeatedly and is barred from running for president for criminal convictions that are seen as politically driven. Other opposition figures also have been sidelined, such as onetime billionaire Mikhail Khodorkovsky, who spent 10 years in prison for tax fraud charges seen as punishment for political ambitions. He now lives abroad.

Putin has barely bothered with campaigning. When he does, he promises a brighter future, implicitly acknowledging a lackluster present.

With around 20 million Russians currently living below the official poverty line of about $180 a month, he pledges higher wages and pensions. He wants better health care to boost life expectancy from 73, several years below European levels. Recent space launch failures have drawn attention to troubles with the struggling aerospace industry, once a pillar of Soviet pride, and he wants Russia to catch up on robotic technologies and artificial intelligence.

"To put it mildly, Putin will have plenty to do in his next term," Kolesnikov said.

Notably, he must ensure that his country can outlast him.

Political scientist Dmitry Oreshkin asked, "sooner or later there will be no Putin, and at that point, what will we do with Russia?"