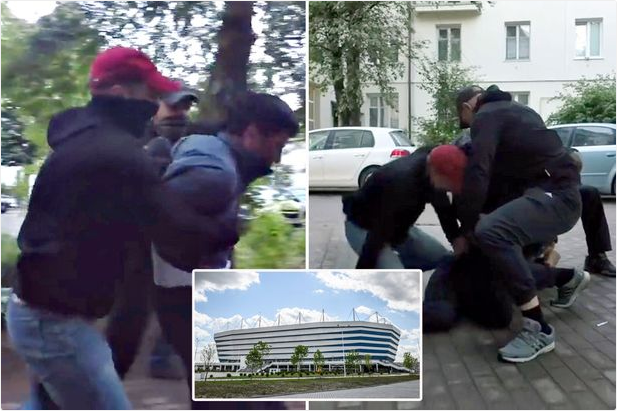 Russian agents have arrested eight ISIS terror suspects in a World Cup city where England will play Belgium in just a matter of weeks. The suspects were allegedly recruiting new members and plotting ideologically-motivated attacks against innocent people during the showcase tournament, according to local media.

Dramatic footage shows police storming into a property and handcuffing men both inside and out on the street.

The alleged Islamic State cell was brought down in Kaliningrad in the Kaliningrad Oblast region, a Russian territory between Poland and Lithuania on the Baltic Sea.

Gareth Southgate’s England selection will play their third game- against Belgium – at the Kaliningrad Stadium on June 28.

A Russian counterintelligence statement said: “During a special operation, eight natives from (former Soviet) republics of Central Asia were detained.”

The eight men are suspected of being “involved in the ‘Jama’at al-Tawhid wal-Jihad’ terrorist group, an affiliate of the Islamic State (IS) international terrorist organisation”.

They were allegedly “recruiting on behalf of emissaries” of the IS cell.

Two suspects are said to be in contact with known Syrian terrorist groups via smartphone Apps.

The suspects are believed to be recruiters, trying to encourage others to join their twisted ideological cause.

DRC: Photo of Catholic Priest Infected With Ebola as Other Bishops Pray for Him Afar