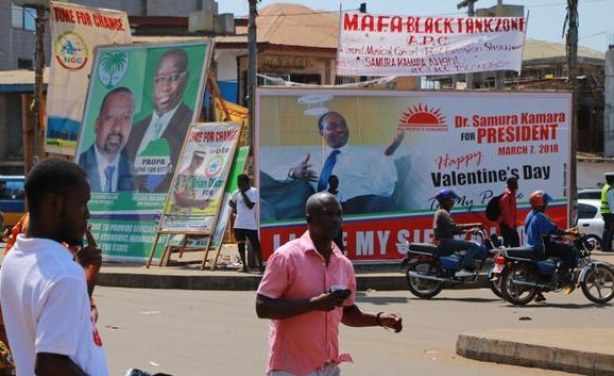 The election campaign has been marred by deadly attacks, pointed rhetoric and at least one legal challenge. The election is expected to hinge on the diamond-rich Kono region in the east.

The final round of voting in a razor-thin presidential election in Sierra Leone — a race that has been marked by controversy — is underway.

The two leading candidates — Samura Kamara of the ruling All People's Congress (APC) and Julius Maada Bio of the Sierra Leone People's Party (SLPP) — are in a virtual dead heat, just as they were at the end of the first round of voting earlier this month, which Bio won by just 15,000 votes in a country with 3.1 million eligible voters.

"The race is too close to call," said Edmond Abu, director of the Native Consortium and Research Center.

Saturday's voting in the West African country was proceeding as planned, according to Momoh Sesay, an observer with the ruling APC party in the capital, Freetown.

More than 11,100 voting stations opened across the country at 0700 GMT but initially, at least, turnout appeared lower than the first round.

"It makes me proud to vote for the president I need to vote for," said Momoh Kamala, a 36-year-old cleaner in Freetown.

The diamond-rich Kono district in the east of the country is expected to be the key to victory for whoever wins, according to Abu, the political expert.

The APC filed a legal complaint alleging that some ballots had been tampered with, forcing a delay in the final round of voting, which was originally scheduled for last Tuesday.

The High Court resolved the issue Monday, but the National Election Commission asked the court for four more days to prepare the election.

Bio, 53, is a blunt-talking, retired brigadier general, who is trying to end the APC party's decade in power.

The former military man was part of a coup in 1992, and briefly led a junta in 1996 that eventually paved the way for democratic elections.

He also ran for president in 2012, losing to the APC incumbent President Ernest Bai Koroma. The president is leaving office after 10 years in power.

The run-up to the election has been characterized by terse verbal exchanges and occasional violence.

Bio has accused the APC of using police intimidation against his party and the electoral commission and of sponsoring the court case to cling to power.

Police have reported a series of attacks on candidates and supporters on both sides since the first round of voting, which saw Bio lead the field by a mere 15,000 votes with a turnout of 84 percent.

Bio has campaigned on a platform focusing on education, corruption and criticism of the government's warming relations with China. Kamara, on the other hand, is presenting himself as the candidate to maintain the status quo — continuing to develop President Koroma's programs on health care and road construction.

China hits back with tariffs on US imports worth $3bn