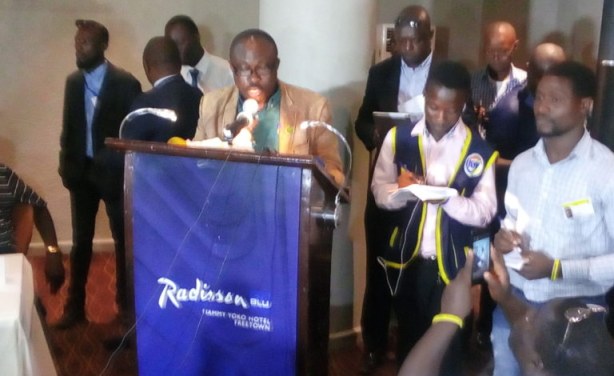 By Abdullateef Salau With Agency Reports

Politics in the West African country of over seven million people has been dominated by two parties: the ruling All People's Congress (APC), now fielding ex-foreign minister Samura Kamara, and the Sierra Leone People's Party (SLPP) behind Julius Maada Bio, who briefly ruled as head of a military junta in 1996.

The face-off between Kamara and Bio was delayed after a complaint about ballot tampering in the first round of voting on 7 March 2018.

Bio narrowly won in the first round with 43.3% of the votes while Kamara polled 42.7%. Both of them were short of the 55% needed for outright victory.

Counting had begun on Saturday evening after polls closed and the elections commission said a result would be announced in the next few days. But speculations are rife as to who has actually won the presidency. The ruling APC rejected reports that early indications of results tallied so far show the opposition SLPP is leading.

"But not so," says the APC's National Secretary General, Alhaji Osman Yansaneh.

"The leadership of the All People's Congress (APC) wishes to extend sincere thanks and appreciation to party members, supporters and the general public for turning out to vote for the party earlier today. Provisional results trickling in put the APC in the lead. We do not expect this trend to change.

"As counting is going on, we implore our members and supporters to remain vigilant to ensure that votes cast at polling stations are protected.

"In particular, we strongly urge all agents to ensure that RRFs are collected from the National Electoral Commission staff after counting, and ensure that they accompany the ballot boxes and other sensitive election materials to the District Tally Centres. We will keep you updated on developments."

In response to the claim of victory by the APC, the National Publicity Secretary of the SLPP – Lahai Lawrence Leema, yesterday took the high ground to position the SLPP ahead of the ruling APC at the polls.

He said, "In light of the results so far in, the SLPP is grateful and humble for the resilience and resolve of Sierra Leoneans to vote change. Indeed, change is here and Retired Brigadier Bio shall soon be declared as the next president elect of the Republic of Sierra Leone.

"Having taken over Kono with a pole margin and increase performances in Koinadugu, Falaba, Kambia and Western Area, it is certain that the SLPP has scored 55 percent over its counterpart in this presidential run-off election.

"Coupled with the landslide victory of Kenema, Bo, Bonthe, Moyamba, Pujehun, Suffice it to say it is over. Brigadier General Retired Julius Bio is Sierra Leone's next president.

"The leadership, however, encourage all its membership and change loving Sierra Leoneans to be patient and wait for the official announcement of the run off by the National Electoral Commission (NEC). The risen Christ is our strength… on behalf of the SLPP leadership, I say happy Easter to all celebrating this optimistic Sunday."

Whoever succeeds President Ernest Bai Koroma, who is stepping aside after his maximum two five-year terms in office, faces a demanding struggle to overturn years of hardship. A slump in the price of commodity exports since 2015 and the Ebola crisis in 2014 and 2015 crippled the economy, which shrank by a fifth in 2015.

Reports said turnout in many polling stations was as low as 50%. Many voters complained that a heavy police presence inside polling stations had deterred people from casting their ballot. Many were forced to walk to their nearest voting station because of a driving ban imposed on election day for security reasons.

"There is low turnout in different parts of the country because of the huge presence of security forces," Julius Maada Bio said after voting in Freetown, Reuters reported.

President Koroma also noted the low turnout when he spoke in Freetown, and urged people to head to their polling stations.

Sierra Leonean authorities temporarily shut down the internet after close of polls in the presidential runoff. The service has since been restored on Sunday morning. Except for The Gambia in December 2016, presidential elections in West Africa have been held without internet disruptions.

Other African countries that have blocked internet during presidential elections have justified the action as being in the interest of national security. Congo Republic, Chad, Uganda and Somalia's Somaliland have all undertaken a similar measure.

On the other hand, Kenya, Egypt, Angola and Rwanda have all held elections with the internet on.