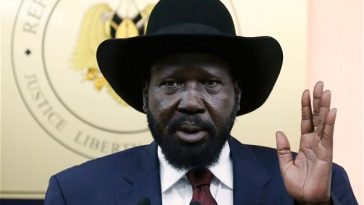 South Sudanese President Salva Kiir has criticized police and other law enforcement agents over rampant insecurity that has escalated in the strife-torn East African nation.

Speaking while at a forum in the capital Juba Thursday, Kiir accused the entire disciplined forces for their complacency as a wave of crime hit many parts of the world’s youngest republic, hence disrupting economic activities and cohesion.

“It is you the senior officers who are responsible for the escalating insecurity in the capital Juba and other towns. There is ample evidence that reveal your collusion in these crimes,” said Kiir.

Last month, Kiir instructed security forces to intensify the fight against crime in the country with dedication and consistency in line with their professional mandate.

“The good example was set a few days ago when a pastor was killed together with his wife. And the criminals who did this are men in the disciplined forces. This is a blot on your profession yet you are supposed to be custodians of the law,” Kiir remarked.

“To kill civilians and rob whatever they have, then other people can decide to run away so that they go and live as refugees if they cannot be protected by their own security agents. This is not good for the country,” Kiir said.

South Sudan’s conflict has now entered its fifth year after it broke out in late 2013 as forces loyal to President Salva Kiir and his former deputy Riek Machar engaged in combat.

Millions of South Sudanese civilians have since sought refuge in neighboring countries as the conflict rages on despite attempts by international players to end it.