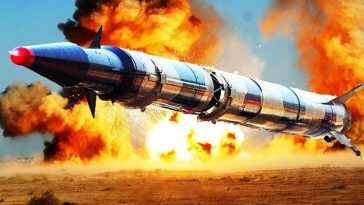 The United States is developing a new prototype nuclear warhead that could be used on a conventional battlefield. Defense expert Philippe Migault sees this as a sign of a return to the arms race.

Sixty-five million dollars. On a US defense budget of 717 billion dollars in 2019 – 14 times the amount of the Russian budget for 2018 – it’s a drop in the sea. But this modest budget line concerns all Europeans. Because these funds are intended for the development of a nuclear warhead, the W76-2, whose characteristics indicate that the United States is ready for a nuclear confrontation in Europe in the context of a possible conflict with Russia.

Designed to be launched from the US nuclear submarines launchers (SNLE) by a strategic missile Trident II D5, the W76-2 is not part of the classic balance of terror. Low power, 6.5 kilotons, not even half of the bomb dropped on Hiroshima (15 kt.), Is not an anti-city weapon, or designed to destroy Russian missile launch sites. Intended to fit into an American arsenal ranging from the sub-kilotonic miniaturized bomb to the megatonic intercontinental missile, it could almost be considered an additional gadget of the Pentagon. It’s a tactical weapon, a battlefield weapon. Except that this battlefield would probably be between Kaliningrad and the Urals.

Certainly, one could conceive that the W76-2 is designed to strike an atomic power in order to destroy its nuclear facilities. One could also imagine it being used against a “threshold” state, such as Iran, in order to annihilate its nuclear program to please Mr. Netanyahu. Except that a Trident II D5 missile is not the most appropriate vector to conduct a high-precision strike against deeply buried nuclear installations.

Weapon of low power, missile to hit anywhere in the world in less than an hour: the Trident II D5 / W76-2 pair seems on the other hand tailor-made for the program Prompt Global Strike (PGS). The latter – at least for the time being – only provides for extremely powerful conventional strikes, conducted using high-precision weapons, on strategic objectives.

But it can perfectly be conceived with nuclear weapons in the early stages of a high-intensity conflict with an atomic power, in order to deprive the latter of a series of installations – communication centers, radar warning system, ports and other strategic infrastructures – allowing it to engage in a gradual nuclear battle, that is to say, to conduct nuclear strikes to achieve its objectives without climbing, from the outset, at the strategic nuclear level. But the only nuclear power corresponding to this pattern is Russia.

Return of the tactical scenario of the cold war

The latter, which is now facing NATO in a situation of conventional inferiority more dramatic than that experienced by Westerners vis-à-vis the Warsaw Pact, has never hidden that it is authorized to open nuclear fire first as part of an aggression, even conducted with conventional means, endangering the survival of the country or state.

What we French were also prepared to do during the Cold War, under the doctrine of the ultimate warning. Moscow, as a consequence, retains thousands of tactical nuclear weapons on whose use the blur is carefully maintained, in order to leave any potential aggressor in the uncertainty of his reaction.

But the Western missile defense shield (ABM) deployed in Europe may, in part, prohibit Russia a nuclear counterattack in case of NATO offensive, it is estimated in the Kremlin. The latter, who has expressed his fears about this device, has, on several occasions, raised the scenario of a strike in Central Europe against NATO ABM installations, in order to restore some parity in case of confrontation and not, so, rise immediately to extremes.

The shepherd’s response to the shepherdess, the development of the W76-2 comes to mean that the Americans not only intend not to deprive themselves of their ABM shield, but are ready to deliver the nuclear battle between Kaliningrad and the Urals if Russia was to use his own tactical weapons. So we left, as in the days of the SS-20 and Pershing, in a scenario of nuclear war that would leave Europe in ruins while sparing the United States …

And the development of this weapon was not even necessary. As noted by a group of American organizations in a letter to Mitch McConnell, leader of the Republican majority in the Senate, the United States already has more than a thousand low-powered tactical nuclear weapons, including several hundreds, bombs B-61, have been deployed for years in Europe.

What to think now? Does the deep state of the United States think that it will be able to bend Russia by impressing it, like North Korea? Does he hope to reuse the old recipes by training the Russians in a new ruinous arms race? It is certain, in any case, that the American decision-makers are doing everything necessary so that some of the weapons presented by Vladimir Putin, during his speech of March 1 in the Duma, are really developed instead of remaining at the stadium of the prototype.