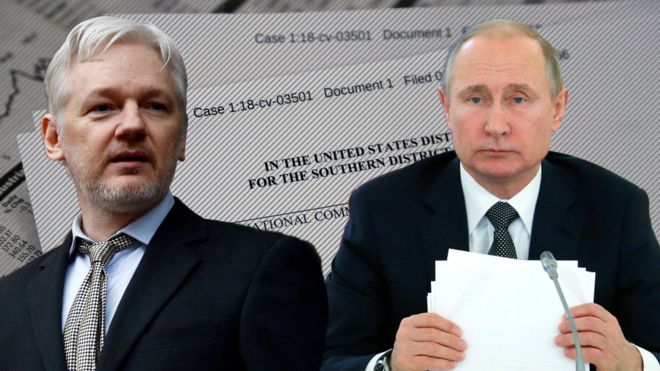 The Democratic Party in the US is suing Russia, the Trump campaign and the whistle-blowing website Wikileaks for conspiring to disrupt the 2016 presidential election.

Documents filed in court allege that the campaign "gleefully accepted Russia's help" to win the election.

The Trump campaign said the lawsuit was without merit and would be dismissed.

"This frivolous lawsuit is a last-ditch effort to substantiate the baseless Russian collusion allegations by a nearly-bankrupt Democratic Party still trying to counter the will of the people in the 2016 presidential election," a statement from the Donald J Trump for President campaign said.

US intelligence agencies previously concluded Moscow had tried to sway the election in Mr Trump's favour.

Several investigations into the matter are already under way.

The BBC's Nick Bryant in Washington says the lawsuit by the DNC is seen as a publicity stunt by many there, as it may not unveil anything that is not already being examined in other investigations – but could keep the matter in the public eye.

Democratic National Committee chairman Tom Perez said in a statement that the alleged hacking was "an act of unprecedented treachery" and "an all-out assault on our democracy".

The Washington Post reports that foreign nations usually have immunity from US lawsuits, but Democrats argue the rule should not apply in this case because Russia trespassed on private party servers.

Media captionAll you need to know about the Trump-Russia investigation

In May 2016 the first reports emerged of hackers targeting the Democratic Party. Over the next two months, the reports suggested US intelligence agencies had traced the breaches back to Russian hackers.

In July, on the eve of the Democratic National Convention, Wikileaks published 20,000 internal emails stolen by the hackers.

US intelligence officials said they believed with "high confidence" that Russia had been behind the operation but the Trump campaign publicly refused to accept the findings.

He writes that he was asked by Mr Trump to drop an inquiry into links between his former national security advisor, Michael Flynn, and Russia.

Mr Trump sacked Mr Comey last year while he was leading an FBI investigation into allegations of Russian interference in the 2016 presidential election.

Mr Trump tweeted that the memos showed there was no "collusion and no obstruction".

Arsene Wenger to leave Arsenal: How will Frenchman be remembered?