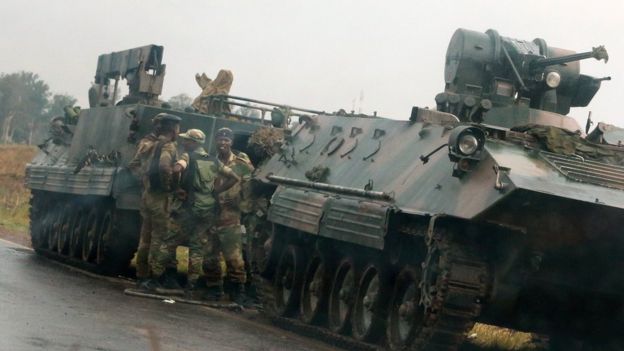 The statement read out by Maj Gen Sibusiso Moyo came hours after soldiers overran the headquarters of ZBC. He said: "We wish to assure the nation that his excellency the president… and his family are safe and sound and their security is guaranteed."

The statement added: "We are only targeting criminals around him who are committing crimes… that are causing social and economic suffering in the country. As soon as we have accomplished our mission, we expect that the situation will return to normalcy."

The statement did not name those targeted but a government source quoted by Reuters said Finance Minister Ignatius Chombo was among those detained.

It is not clear who is leading the military action.

Other key points of the statement included:

The UK Foreign Office advised Britons "currently in Harare to remain safely at home or in their accommodation until the situation becomes clearer".

The US embassy in Harare tweeted that it would be closed on Wednesday "due to ongoing uncertainty".

It also advised US citizens in Zimbabwe to "shelter in place" until further notice.

Alex Magaisa, former adviser to Zimbabwean opposition leader Morgan Tsvangirai, told the BBC he believes the military's claim that they haven't carried out a coup is untrue.

"They have decided not to call it a coup because they know that a coup does not sell, it will be condemned," he said.

"But as far as authority is concerned it seems very clear that President Mugabe is now just a president in name and authority is now residing in the military."

General Constantino Chiwenga had challenged 93-year-old President Mugabe after he sacked the vice-president.

Tensions were raised further on Tuesday when armoured vehicles were seen taking up positions on roads outside Harare, although their purpose was unclear.

Some staff at ZBC were manhandled when soldiers took over their offices in Harare late on Tuesday evening, sources told Reuters.

Workers were told that they "should not worry", a source added, and that soldiers were only there to protect the site.

The BBC's Shingai Nyoka, in Harare, said the sounds of heavy gunfire and artillery had been heard in northern suburbs where a number of government officials, including the president, live. 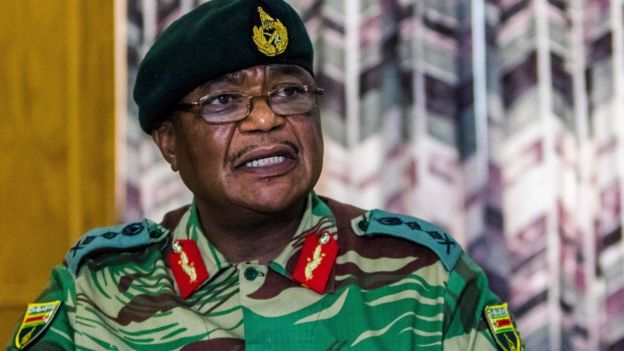 Gunfire was heard near Mr Mugabe's residence in the suburb of Borrowdale early on Wednesday, a witness told AFP news agency.

Mr Mnangagwa had previously been seen as an heir to the president, but First Lady Grace Mugabe is now the clear front-runner.

The rivalry between Mrs Mugabe and Mr Mnangagwa has split Zanu-PF.

Last month, Mrs Mugabe warned of a possible coup plot, saying allies of Mr Mnangagwa were threatening the lives of those who didn't support him.

The party said it would never succumb to military threats, and that it "reaffirms the primacy of politics over the gun".

The leader of Zanu-PF's youth wing, Kudzai Chipanga, said the general did not have the full support of the entire military.

"It is our country and future at stake and we will not let any individual military man interfere with the leader of the party and legitimately voted president of this country," he told reporters on Tuesday. 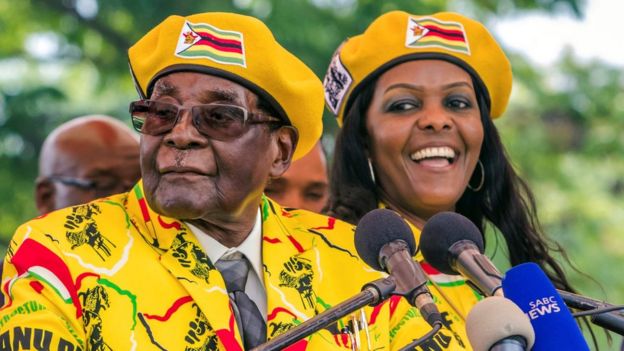 The youth wing is a strong supporter of Grace Mugabe.

Gen Chiwenga's warning of possible military intervention came on Monday at a news conference at army headquarters where he was surrounded by senior army officers.

He said the "purging" within Zanu-PF was "clearly targeting members of the party with a liberation background", referring to the country's struggle for freedom from white minority rule.

"We must remind those behind the current treacherous shenanigans that when it comes to matters of protecting our revolution, the military will not hesitate to step in," he said.

Mr Mnangagwa is one such veteran of the 1970s war which ended white minority rule.

5 dead in Northern California shootings that ended at elementary school