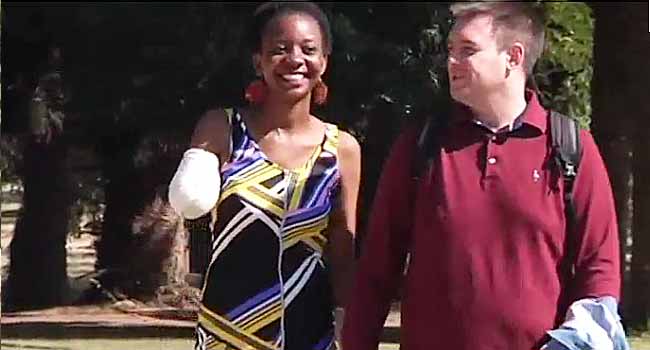 A Zimbabweanwoman who lost her arm after a crocodile attack whilst holidaying with her fiancé, wedded days later in a hospital chapel, state media reported Tuesday.

A picture in The Herald showed Ndlovu-Fox decked out in her white wedding gown with her remaining upper right limb covered in white bandage.

The lovers were canoeing along the Zambezi river, near the Victoria Falls, when they were attacked by a crocodile few days earlier.

“The crocodile just jumped out of the water and bit a chunk of my arm together with the side of the boat,” Ndlovu-Fox told the newspaper.

“The canoe started deflating and it all happened so fast. The crocodile bit me again and pulled me into the water. My husband was thrown out on the opposite side, so the boat was between us.”

She said her husband and their tour guides wrestled the crocodile which later released her before she was airlifted to a hospital by a helicopter where the crushed part of the arm was amputated.

Hospitalised, she walked up the aisle to wed Fox at the infirmary.

“I spent a lot of time preparing for my wedding day, running around for venue, decor and so forth. I didn’t know that fate would have me wed in a hospital chapel, with one limb missing,” she said.

Despite all this, “my wedding was the best,” Ndlovu-Fox said.

Her husband told the same newspaper that the crocodile attack strengthened their union.

“This incident actually made me feel the deep meaning in our vows. For the better or worse, in sickness and in health, that’s just how our love is going to be,” said Fox.

The couple is reportedly preparing to relocate to Britain soon.